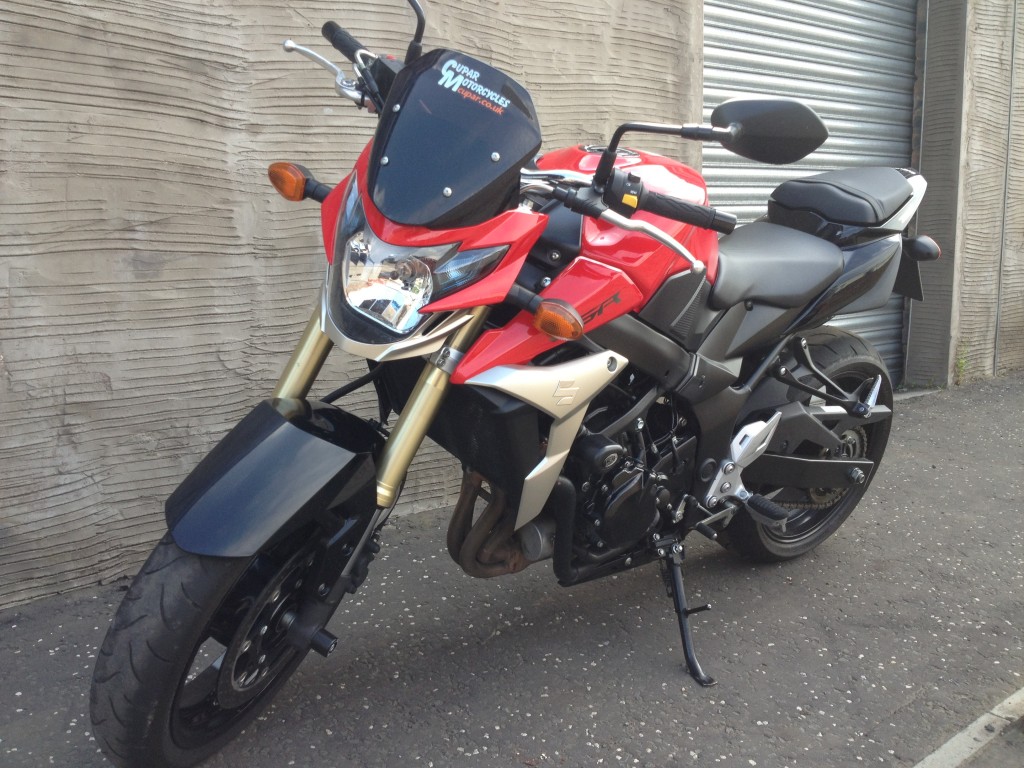 So it is that I find myself holidaying the UK with the forecast for a perfect Scottish summer with the temps in the low to mid twenties for almost two weeks in a row – and thought this is it, get a bike now and take advantage of the great weather.

Sadly, much like last time I was here, and the time before, I couldn’t find a single Ducati to hire in Scotland. I had my research done and opted for a cheap(er) day rate on a little Suzuki GSR 750 naked from Cupar motorcycles.

I found them to be great to deal with, Roger let me pick from the current model DL 650 V Strom (which has clearly been made by the blind for the blind) or the GSR  750 when I got there, and jumping on the little gizzer I felt right at home, it fit me kinda well. Bars could be a touch higher but otherwise a comfy riding position so a few bits of paperwork and photocopying later I zinged out the door belting back down the A9 heading home. Easy done.

I should say ‘easy done’ with the help of a few good pals who threw me a pair of SIDI racing boots, ventilated leather J&S jacket and a Shoei XR 1100 in Large, all a perfect fit. I managed to grab a pair of Kevlar lined denims for £49 from J&S Accessories, which I can bring home with me so I was pretty well kitted out with minimal outlay. Brilliant.

Feeling a bit flat that day

The bike cost me just under £400 for a five day hire including full comprehensive insurance and a £20 levy for being an international license holder. It was money I factored in for a good few days riding but geez I wish I could have done my money on a little Hyper or Monster. Take note anyone with a venture capital swag, get a Ducati rental shop going in Scotland stat.

The little gizzer was singing along nicely and it felt absolutely brilliant to be out amongst it, sitting on 70MPH on the little naked, thinking this is the life, good choice, well done Dan, pat on the back for you. I nodded at a dude in an angry looking black Range Rover Sport as I passed him, tucking back in front to sit back and enjoy the trip, getting used to the feel of this strange inline four-cylinder zinger box I was atop of.

Nek minnit, said Range Rover roars up alongside me and pulls up real close, and I starts getting all nervous like ‘oh-shit-was-it-a-cop-and-I-was-speeding, have-I-disobeyed-some-unknown-Scottish-road-rule, wattisit?’ and I see him mouthing the words ‘exhaust or muffler’ and ‘hanging off’, so I glance down at my left side and sure enough the stock pipe is swinging in the breeze held on only by the header clamp!

This is not what it is meant to look like, I’m positive.

Now I am the first to admit that I am a mechanical luddite, but I could easily see that all that was missing was the bolt going through the pipe onto the rear pegs. Thankful it was something simple I heaved the pipe back up to where it should be and limped it off the motorway at the next junction which was luckily only half a mile down the road. As luck would have it a small town, I think it could have been Auchtermuchty, was only another mile off the slip road and the first thing I see pulling into the main street is a local mechanic.

Perfect, a bolt/nut was found, fitted and a fiver paid and with much thanks for his help I was off again. Bikes. Bits rattle off sometimes. What can I say.

This is what it should like I’m pretty sure.

Back on the road and I’m starting to feel my way round this foreign machine and I have to admit it feels good. It revs hard and freely, pulling you up to way beyond legal speeds easily, the steering is pretty light and goes where you point it, and I have a good sense of where the power is getting down on the road. It’s strangely quite comfortable to chew up a few miles on the motorway.

One of the things I like about Scotland’s roads are the huge roundabouts. Massive three and four lane things with 50MPH speed limits (I hope they are!) that you can just crank it over and power out of – such a great feeling.

Up around where I am staying there is an industrial estate with heaps of the buggers all in a row and lining em up with nothing but paddocks and clear views all around is more fun than I can explain. Flying, swooping through roundabouts is only second to powering up sweeping mountain roads I reckon.

The power of the inline four comes on later than I’m used to, different from what I am used to with a big twin, but it produces some decent thrust which is quite satisfying when ya ring its neck. I’m reminded of the goodl ole days on my RGV 250 and that powerband… This bike boasts a 105bhp and weighs in at 210kg so it delivers what it’s got in a way that is easy, accessible and mostly, comfortable. No complaints so far, apart from bolts falling out of course.

Lochs are everywhere and surrounded by stunning coastal roads.

Brakes. Hmm. Not what I am used to. The twin pot discs up front feel spongey and don’t exactly pull you up hard like I’m used to on the Brembos, and there is a funny thing I find with the neutral throttle position on the gizzer.

Several times I have found myself trying to brake into corners yet accelerating at the same time, just that little bit like the idle is high for a trick bike or something, and I have to consciously roll another notch forward to shut the throttle off completely. I’m certain this kind of throttle control might be the wizardy of drifting but alas I am no stunt rider, so I’m just making certain I have fully backed that throttle right off and I’m covering the rear brake to straighten up if needed. The rear brakes are good and I find myself trailing them quite a bit too.

It’s not a well-refined super set up bike by any means, and it doesn’t inspire me like that first time I jumped on a Hyper, Multi or Diavel but I like it enough, it’s good fun and has to be the best way to get around Scotland for five days.

So, with that said, I’m outta here. Check in with ya later with more photos, who knows maybe I’ll spot Nessie out on the Lochs….